Milfoil — Beating back the invader 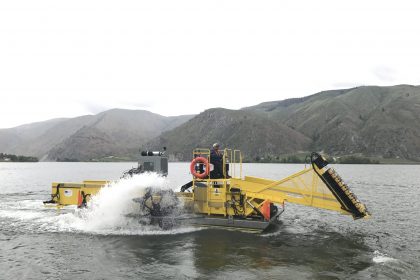 Milfoil — Beating back the invader

This harvest feeds no hunger, just a compost pile.

The benefit from the harvest is safety and convenience for users of parks along the Columbia River in Washington: no tangled feet and easier launching for boaters.

The harvester cuts the milfoil below the water level, catches and lifts it onto a conveyor and secures it in a holding tank until the harvester docks and the milfoil is removed.

Smith and Mendoza have worked together since 1997 and have been harvesting milfoil for the state and county parks along the Columbia River in Chelan and Douglas counties for two years.

A day harvesting milfoil begins with getting the harvester ready for the water.

They lower the paddle wheels, take the “Oversize Load” sign off the back and erect a large shade umbrella over the seating area. Even with the umbrella, they lather on the sunscreen and get ready for a hot day on the water.

Also with them are inflatable vests, safety goggles, ear plugs, lots of water and iced Gatorade.

The men back a trailer holding the harvester into the water, then push the machine off the trailer with the help of a hydraulic lift.

While one person runs the harvester on the water, the other stays on shore, performing basic maintenance on the pump and trailer.

When the harvester is full, it is maneuvered toward shore, where the conveyor is shifted into reverse and the load is dumped onto a truck bed. The load is then taken to a compost heap on park grounds.

Keith Truscott, environmental and permitting manager for Chelan County PUD, says milfoil has such a high water content that even a very large pile will break down to almost nothing when it dries.

By the time the truck has come back from dumping the weeds, says Smith, the harvester is often full again and the next batch of harvested milfoil is ready to be taken to the compost pile. 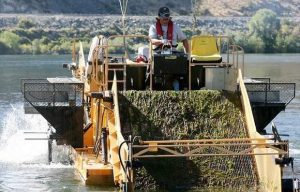 Mendoza and Smith agree that Dave Coble, their crew leader and the man who trained them to use the machine, holds the record for most loads harvested in a single day at 26. Mendoza and Smith claim they aren’t really keeping count, but Mendoza says his personal record is about 14.

The size of the park, technical difficulty and the amount of milfoil to be harvested determines how long it takes to finish each park and how much is harvested each day.

Mendoza says the job is easier when the water level is lower. The milfoil and any hazards are easier to see then.

Both he and Smith concede the most difficult park is Will Risk Memorial Park, commonly known as Entiat park. Foundations from the original town of Entiat, buried underwater after the erection of Rocky Reach Dam in 1961, are near the surface there. The two slow down when harvesting that area to prevent damaging the machine.

If something on the harvester needs fixing, often it can be done while still on the water, with the tools kept on board.

Harvesting can get a little scary when the gates at dams open, Mendoza says. With the stronger current and a full load, the harvester can’t move very quickly and has to fight against the current.

Duties working in park maintenance vary and include plowing snow in the winter, mowing lawns and pruning.

The two men work four days a week, Monday through Thursday, avoiding Fridays and weekends because the boat launches and parks are busier on those days.

“We try to be considerate and stay out of people’s way,” says Smith.