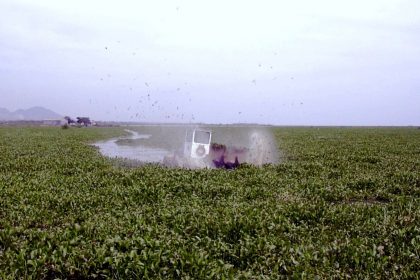 Aquarius Systems was featured on a National Geographic Cable Channel program broadcast in the United States on April 2nd and 5th, 2003.

Since 1998 Aquarius has been working on Lake Victoria in Kenya using our patented Swamp Devil Aquatic Vegetation Cutters to eradicate devastating masses of water hyacinth. A film crew from National Geographic visited our base in Kisumu for three days to shoot exciting footage of the equipment in action. While they were out on the lake, they happened to film a rescue made by the Aquarius staff, who retrieved two fishermen who had been trapped in their boat for two days, stuck in the dense weed growth.

The exotic water hyacinth has severely impacted the Lake Victoria region from both an environmental and an economic perspective.