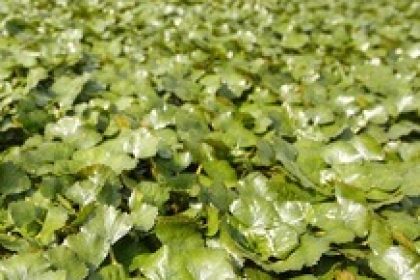 Heard Pond became so heavily infested that the beauty and recreational value of it were lost.  Once flourishing with native water lilies Heard Pond had a reputation for great fishing and bird watching.  All gone, due to the lack of open water, nearly completely covered with water chestnut.

Water chestnuts are native to parts of Eurasia and Africa, but have been observed in North America since 1859.  Introduced as an ornamental plant, the water chestnut quickly forms dense floating mats which crowds out native vegetation.  Once established, it can reduce oxygen levels, increasing the potential for fish kills. An infestation will limit boating, fishing, swimming and other recreational activities.
This annual aquatic plant has a submerged stem which can reach up to 15’ in length while it’s fine roots anchor the plant in the mud.  Water chestnut produces flowers in June and then a produces a nut with 4 – ½” barbed spines which can cause injury while swimming.  The seeds can remain viable for up to twelve years although most will germinate within the first two.
In 2003, crews began harvesting the water chestnut on Wayland, Massachusetts’s Heard Pond.  Heard Pond is 85-acre pond that is almost completely surrounded by U.S. Fish and Wildlife land.  Originally from Eurasia, produces large seeds with barbed spikes and large leaves that can quickly cover the water’s surface.

That summer aquatic weed harvesters were put to work and removed 1.2 million pounds of the aquatic plant.  Then again in 2004 when 500,000 pounds were removed and yet again in 2005 with the removal of 192,000 pounds of water chestnut were harvested from the water and taken to compost.

Successive season mechanical harvesting saw a steady downward trend and by 2009 hand harvesting became the primary course of action with as few as 240 pounds collected in 2012.  Since water chestnut is an annual plant, seasonal harvesting is necessary to rid the lake of the millions of seeds that must have been in the water at the beginning of the whole lake harvesting process.  One unharvested plant can produce 20 to 30 seeds.

The native water lilies are in abundance on the shoreline and waterfowl have returned along with watercraft and people.  Heard Pond is once again the water jewel of Wayland.  Unfortunately water chestnut will never completely disappear from Heard Pond, but these previous years efforts have left Wayland officials with a small scale maintenance and management effort.
Read More
Tagged under: aquatic weed harvester, harvesting water chestnut, invasive water chestnut, mechanical harvester, water chestnut
TOP