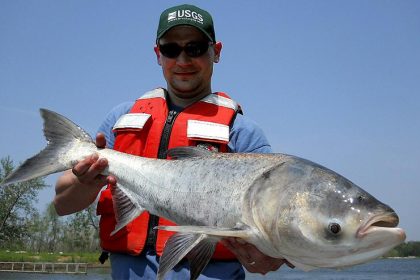 Over the past decade, researchers at the University of Minnesota have tested a number of strange ideas to find a method to eradicate or at least cut down the number of common carp that have taken over and changed the makeup of lakes and wetlands throughout the state.

One method is a largely automated system; during migration, electric fences guide carp into a pen that traps the much larger carp species while most native fish can swing through. Once the carp are corralled, an electric shock slightly stuns them over the conveyor belt, which scoops them up one by one; any native fish that are incidentally captured can be safely released.