Winterkill Can Have Devastating Effects on Fish Populations 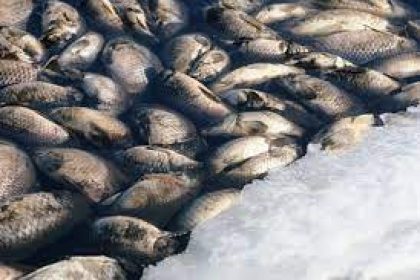 Winterkill occurs when fish suffocate due to a lack of dissolved oxygen in the water and is the most common type of fish kill. Dissolved oxygen is required by fish and almost all other forms of life living in water bodies. Even bacteria living on lake bottoms require dissolved oxygen to survive.

Low oxygen levels are the result of various factors. When ice and snow begin to cover water bodies, the amount of sunlight penetrating into the water becomes limited. Aquatic vegetation is then unable to produce an abundant amount of oxygen. Like in terrestrial habitats, a large proportion of oxygen in the water is produced by plants. If plants do not have sunlight to allow for natural processes, the oxygen byproduct is not produced.