A Goldfish Explosion in Hamilton Harbour Stresses the Ecosystem 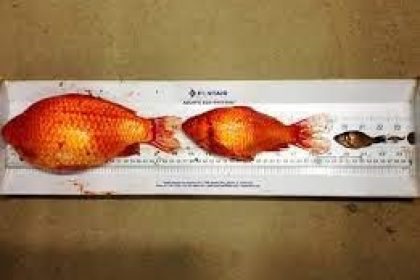 The water of Hamilton Harbor in Ontario, Canada, has been used and abused over the decades, as sewage water and industrial by-products have flowed into the port since the 1800s with devastating consequences for the harbour’s flora and fauna. Today, treated sewage water, which isn’t fully cleansed of algae-causing nutrients, is still released into the harbour, along with occasional sewage overflow. The water has little to no oxygen, making survival a struggle for native fish species like walleye and yellow perch.

But, goldfish are the ultimate survivor of difficult conditions. They feed on blue-green algae blooms that native species cannot—blooms that appear with increasing frequency in Hamilton Harbour, due to pollution and warming water. What’s more, the creature’s bottom-grazing uproots vegetation and increases the water’s murkiness, both of which make life still tougher for other inhabitants. The goldfish, meanwhile, are rapidly reproducing. Without management, experts say, they’ll squeeze out their native competitors and take over.