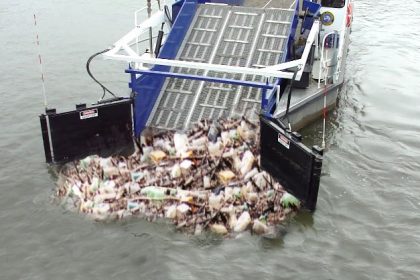 This adoption program requires just three days of personal, hands-on time annually and a commitment of no more than two years.

Businesses and community groups are being asked to volunteer for a first-ever “adopt-a-river” program in Wisconsin and remove trash along the Milwaukee, Menomonee and Kinnickinnic rivers and their tributaries, Milwaukee Metropolitan Sewerage District Executive Director Kevin Shafer said.

Garbage pollutes the water and degrades habitat for fish, birds and other wildlife, Shafer said.

The program works alongside the district’s 50-foot-long river skimmer. The skimmer, named Lynyrd Skymmr as a tribute to southern rockers Lynyrd Skynyrd in a 2011 contest, hit the water Tuesday for the first time this year under the command of Capt. Scott Cassavant.

His crews pull garbage, debris and navigation hazards out of the rivers near downtown.