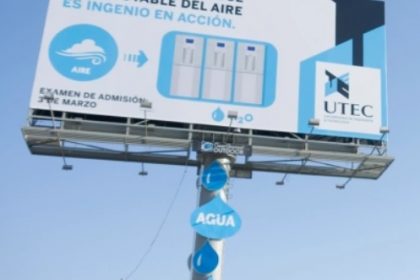 What would a great ad for a university of technology be? An ad, that itself, solves a problem through technology. This is exactly what the University of Engineering and Technology of Peru and their ad agency have done.  They created the first billboard in the world to make drinking water out of thin air and alleviate the lives of Peru’s people.

Trying to inspire young people to pursue careers in engineering, the university and ad teams decided to show how technology can be used to solve local problems. One such problem in Lima is the lack of running water. Due to the extremely dry climate with an annual precipitation of less than 1 inch, most people draw water from wells that are often polluted. On the other hand, the atmospheric humidity in Lima approximates 83%. 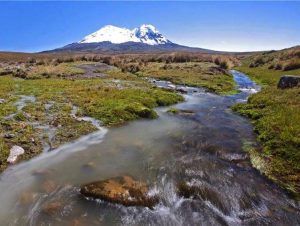 A study shows that the Andean glaciers, which provide fresh water for the residents of Peru, among other countries, have shrunk between 30 and 50 percent since the 1970s. As water supplies dwindle amid climate change, growing populations and food insecurity issues innovative solutions must be developed.

The panel consists of five machines which convert humidity into water through use of air and carbon filters and a condenser.  This reverse osmosis, a water purifying process then stores the water in five tanks located at the top of the structure. The filtered water flows into a pipe at the bottom of the billboard, supplying the neighboring community with clean water. In the three months since it was first installed, the billboard has produced 2,496 gallons of water. 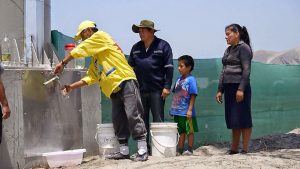 Hopefully enrollment has increased at the University.