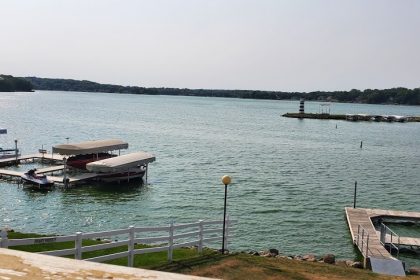 In the 1970’s a group of private property owners dammed the Middle Raccoon River to form Lake Panorama.  When the river rises, either due to heavy rain or snow melt not only does the excess water drain into the lake, but so does the debris the rushing waters carry.  The debris mostly consists of organic material such as leaves, logs and branches which can damage boats and piers as well as cause navigational hazards.

In the 1990’s barriers were put in place to stop the debris from entering the lake, but not all debris is captured as openings for boat traffic allow the debris to escape.  In 1999, the lake association purchased an aquatic trash skimmer to collect the debris from the barrier as well as coves around the lake where the escaped debris can settle. 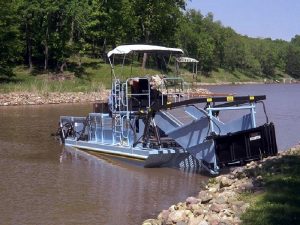 We are happy to say, the lake association celebrated 2020 with a new and improved aquatic trash skimmer.  This new skimmer holds three times the debris and is quite a bit faster.  The additional speed is welcome as boat can be deployed and collect escaped debris before it can scatter all over the lake. 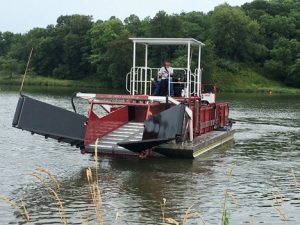 The first machine will be retained to use as a backup.