Asian carp were imported from China to the U.S. in the 1970s to remove algae from catfish farms and wastewater treatment ponds. Somehow they escaped and migrated north through the Mississippi and Illinois rivers.

The species spawn in rivers and feed on phytoplankton, disrupting the food chain for younger fish. The voracious eaters can weigh as much as 100 pounds and grow to four feet.  The longer the carp remain in large numbers, the greater the chance that they could devastate the aquatic environment.

Asian carp made national headlines in 2010, when federal and state officials worked to track the fish in Illinois and the carp threatened to reach the Great Lakes via the Chicago River.  It was predicted that the carp would crush the Great Lake fishing industry and destroy the already fragile ecosystem if infiltrated.

In 2013, Asian carp DNA was discovered in the Wisconsin waters of Lake Michigan. It can’t be determined how the DNA got into the water whether by a live fish, dead or from a bird, but the threat is real.  Last month, a joint Army Corps and U.S. Fish and Wildlife Service report showed fish were moving through the electronic barrier in the Chicago Waterway meant to serve as Lake Michigan’s last line of defense against the carp.

Asian Carp Leaping From the Water

With the Asian carp within 55 miles of Lake Michigan, the Army Corps of Engineers were assigned the task of determining how to keep the carp from reaching Lake Michigan.  After seven years, the report outlines eight different options, but didn’t recommend one.

The options provided include physical separation, special locks and gates and chemical agents.  In a situation where time is of the essence, one option which relies largely on a new kind of lock, chemical treatments and more, but with limited physical barriers would take about 10 years and $8 billion to implement.

Another option would take 25 years and $15 billion to $18 billion and while may be the most effective option has now only time and cost hindering it, but would have a cost impact on commercial cargo.  This option faces much criticism from business interests. 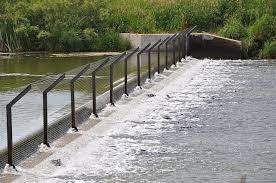 That option would be to put a physical separation at the edge of Lake Michigan.  Not only would this keep the Asian carp out of Lake Michigan, but also prevent the invaders found in Lake Michigan from making their way into the Mississippi watershed.

While the separation is going to have a lot of opponents, it seems to be the only real solution that will truly protect the Great Lakes.  It will not only stop the Asian carp from coming into the Great Lakes, it will stop any further diversion of the Great Lakes water.

According to a 2012 study by Canada’s Department of Fisheries and Oceans, it would take as few as 10 male and 10 female Asian carp to establish a reproducing population in the Great Lakes.