Can Invasive Aquatic Plants Save the Florida Manatee? 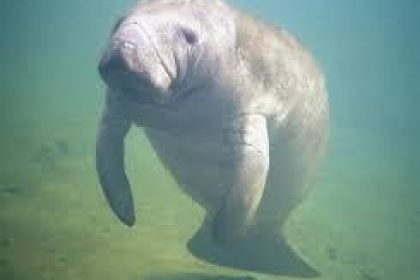 Florida’s tropical waters are home to a great diversity of life, but perhaps the most endearing is the Manatee.  The manatee is a grazing animal and spends between six and eight hours a day feeding on seagrasses and other freshwater vegetation.  The manatee actually plays an important role in controlling the aquatic plant growth in Florida’s shallow rivers, bays, estuaries, canals and coastal waterways.

As the human population increases and waterfront development continues, manatees are losing habitat.  The development also damages seagrasses, degrades water quality and reduces the availability of the warm waters that manatees rely upon to survive.  Waters below 68° can prove fatal to manatees.

2013 was the deadliest year on record for the endangered manatee.  With populations of less than 5,000 they have suffered due to boats strikes and algae blooms that not only left many manatees dead, but also destroyed their food supply resulting in even more deaths.

In order to protect the manatees, the U.S. Fish and Wildlife Service will establish a year-round manatee refugee in Kings Bay, its tributaries and adjoining water bodies.  Kings Bay, located at the headwaters of Crystal River and consists of 30 known springs that used to be clear and beautiful.

The once crystal clear water with clean white sand bottoms is now in distress.  Excess nutrients from wastewater, septic tanks and stormwater runoff resulted in declines in water clarity and growth of nuisance aquatic plants.  One such aquatic plant, water hyacinth is now part of an experiment to help restore the Bay and save the manatees.

Water hyacinth once choked the waterways and extensive control measures began in the early 1900’s.  With the water hyacinth under control, filamentous blue-green algae arrived.  A controversial experiment is now under way in Kings Bay to reduce algae populations and remove nutrients by using the ever efficient filtering of the water hyacinth.

Water hyacinth will be placed in containment cages to prevent their spread.  It is believed that the shade from the floating aquatic plants and the nutrients they will remove from the water will make a substantial difference in water clarity in the area.